For nearly 50 years pronation has been one of the running technique characteristics that has been considered by footwear manufacturers and runners when choosing their running shoes – for example, the choice between neutral, support, and motion control shoes for those with increasing amounts of pronation.

Pronation is the inward rolling of the movement which occurs during each foot landing as the pressure moves from the outside of the foot to the inside. Pronation is one of the body’s mechanisms for absorbing the energy of each running step. But for a long time it is has been thought that either too much pronation (Over Pronation) or not enough pronation (Under Pronation) increases the risk of injury to the runner. The scientific evidence for the role of pronation as an injury risk factor is not as clear-cut as you might imagine but, on balance, the evidence supports that most runners should be trying to avoid the extremes of Under- or Over Pronation and aiming for a medium amount of pronation with each step – Neutral Pronation.

One of the problems with using the amount of pronation as a factor in footwear selection is that the assessment of pronation is often made as a static assessment of foot posture - this doesn’t necessarily translate to the motion of the same foot during running gait - or the pronation assessment may be derived from a subjective observation of a few minutes of treadmill running. An individual’s running gait will vary between treadmill and outdoor and potentially between different surfaces or terrains outdoors. It may also take more than a few minutes for a runner to get accustomed to a different pair of shoes for the genuine pronation characteristics to arise and pronation in a specific footwear may also depend on fatigue status. For all these reasons it is of most benefit to runners to have a continuous measure of pronation for as many steps of their running as possible if they want to build up a genuine picture of this aspect of their running technique.

Pronation Profile gives a continuous trace of a runner’s pronation on both the left foot and right foot. It indicates whether the runner is expressing Under Pronation, Neutral Pronation or Over Pronation, whether this is the same or differs between left and right feet, and whether the amount of pronation changes with other factors such as fatigue, footwear, surfaces, and more.

Reading This Graph: The timeline of the run is shown on the bottom axis as splits (km or miles). The green zone represents Neutral Pronation, the upper zone is Over Pronation, and the lower zone is Under Pronation. The user can select to show traces of both feet (the default) or toggle to show only the right foot or the left foot. The % values to the right of the graph give the number of steps which fall into Over, Neutral or Under Pronation (from top to bottom) and the values are based on the data currently showing in the graph. The top 3 graphs to the left are taken from a single run on tarmac with minimal gradient changes. We can see that this runner is showing very much Neutral Pronation on the right foot and part Neutral and part Over pronation on the left foot. No real change due to fatigue is visible in this example. 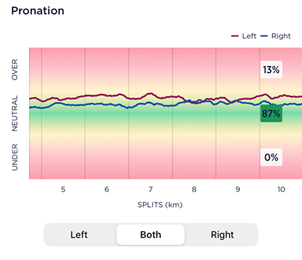 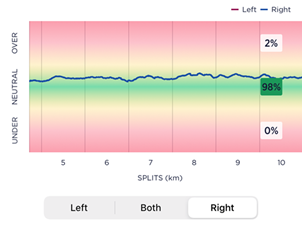 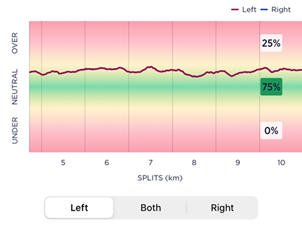 The screenshot shows an example of how foot pronation changes with different terrains. In this run splits 2-4 were mainly uphill on uneven terrain and this is responsible for the more variable pronation response by the runner to accommodating this uneven terrain. 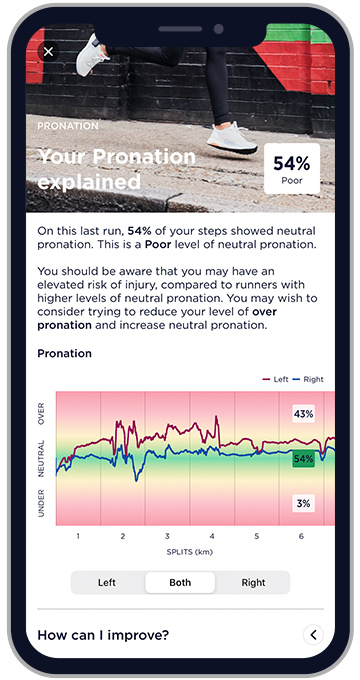 Over the past few months we have come to recognise how sensitive NURVV metrics are to footwear changes. Pronation Profile for each run also allows runners to change footwear between run sessions and gain a detailed picture on how their footwear choice, e.g. cushioned versus lightweight or neutral versus support shoe, may be impacting their Pronation metrics during the course of a run. Because the pronation metrics are tracked continuously over the entire run the runner can monitor where pronation characteristics are at the start of the run (when fresh) and whether different footwear choices have more or less trend in the presence of fatigue.

In the case study below our runner has completed two runs in different footwear. In Shoe A they demonstrate a tendency towards Over Pronation which is more marked on the left foot, and there is a trend towards more Over Pronation after a few splits. Running the same course in Shoe B our runner shows a shift back to more Neutral Pronation on both feet but still keeping a slight offset between the behaviour of the left foot and right foot. The observed pronation seems to stay more constant in this footwear too, so overall seems a better choice for this runner.