What is Distance, Time, and Pace?

Time is the duration of the run or the duration taken to cover one 'split' measured in hours, minutes and seconds (hh:mm:ss format). For example the 5.00 km run might take 20:00 minutes.

Speed is Distance divided by Time and represent the distance covered in a given amount of time. For example the 5.00 km run which takes 20:00 minutes has an average speed of 15 km/h.

Pace is the inverse of speed and the speed quantity most often used by runners.

Pace is Time divided by Distance and represents the amount of time taken to cover a given distance. For example the 5.00 km run which takes 20:00 minutes has an average pace of 04:00 minutes/km.

Distance, Time, and Pace are the ultimate performance metrics for runners. The objective of nearly all competitive running events is to cover a given distance in the shortest duration of time possible, that is cover the distance at the highest average pace possible. Even away from competition then most runners will have their own personal challenges to increase their distances, or beat their times, or improve their pace.

In certain run modes the format of this information varies to suit the specific intention of the run modes. 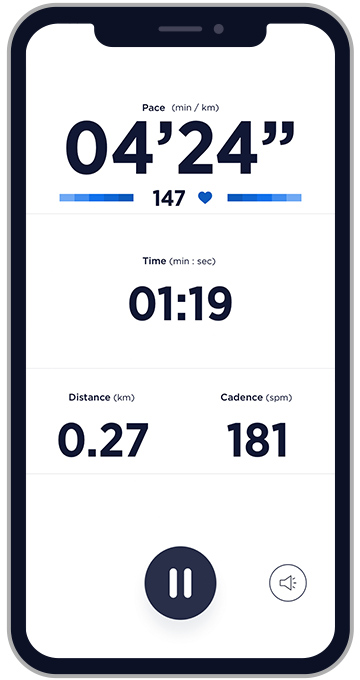 Post-run, the main Run Summary screen has a blue banner (underneath the map or Indoor Run graphic) which displays the Total Distance covered in the run, the Total Time taken for the run, and the Average Pace of the run, provided either in metric or imperial units depending on the units chosen in the Settings screen.

The Splits tab of the Run Summary screen will provide a table where the run is broken down into splits (1 km or 1 mile intervals) and this table displays the Time Elapsed to reach each split marker, the Average Pace for that split, and the change in Pace for that split compared with the previous split. 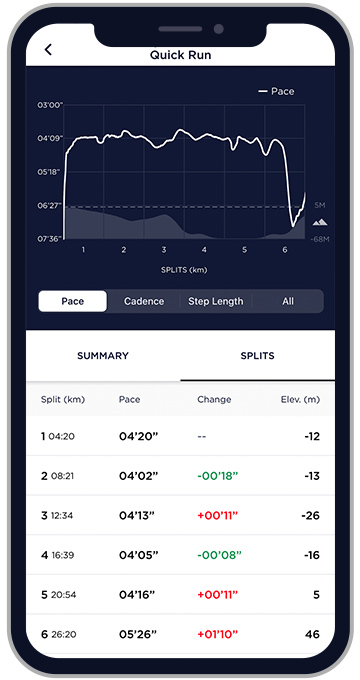