Should I consider changing my Footstrike?
NURVV does not recommend one Footstrike pattern universally since this aspect of running technique, like many others, does not seem to be a one size fits all issue.
The importance of which Footstrike pattern a runner uses, and the question of whether there is a preferred Footstrike pattern, are still active topics of debate and research in the running community.

Nevertheless, many runners are interested in what their Footstrike actually is and a Footstrike transition is often a component of a “run retraining” package.

If you're considering changing your Footstrike, you can use our Footstrike decision flowchart below to help you decide whether adopting a new Footstrike might be a good option for you to consider.


How does a Footstrike transition work?

Rearfoot to Mid/Forefoot
Shifting away from rearfoot Footstrike to Mid or Forefoot striking is commonly suggested as a way to reduce loading on the body (mainly to avoid peak impact forces that accompany the initial contact of the foot with the ground when landing on the heel). It can also be used to shift loading patterns and reduce injury risk (specifically to offload the knee and hip). Some researchers even suggest a link between an improved running economy and Forefoot and Midfoot striking rather than Rearfoot striking. This, however, still needs further investigation as there is a lot of conflicting data on how strong this relationship is and whether this is the case for most runners or only specific groups and types of runners.

Forefoot to Mid/Rearfoot
Some healthcare professionals propose transitioning from Forefoot to Mid- and Rearfoot landing as a way to offload the front part of the runner’s feet, especially when he/she is suffering from increased pain to the metatarsal heads, calf muscles or the Achilles tendon. Rearfoot striking is also often used when running prolonged distances (such as ultramarathons) or when a runner is experiencing increased levels of fatigue.

Run re-training programs
A transition in Footstrike pattern is often included as part of a broader run retraining program, which may focus on combining increased Cadence with an altered Footstrike pattern.
When a runner is introducing a change in one aspect of their running, it will have an impact on other metrics and also muscle engagement, so these programs are for those prepared to commit to changing their running form in the long term.

NURVV's Footstrike tools
NURVV wants to help runners to successfully identify and experiment with different Footstrike patterns as well as to assist runners to make permanent Footstrike changes where necessary, through a safe progression undertaken over a number of weeks. We've developed two unique features to support runners in reaching those goals: Footstrike Trainer and Footstrike Coach.

Both features provide per-step visualization of the Footstrike landing pattern being used by the runner, independently on the left and right foot. If you are a novice runner or you don't have a detailed understanding of your running style, you can use Footstrike Trainer to make the connection between how your foot landing feels and what type of Footstrike you are actually using in the controlled environment of treadmill running. You will also be able to discover if your Footstrike is the same for your left and right foot or whether you have a mismatch. A mismatched Footstrike is suggestive of left-right differences elsewhere in your biomechanical "chain".

Once your typical patterns are established and if you decide to make a change in Footstrike for any reason (due to injury, to balance Footstrike asymmetries or to tackle a decline in performance), you can use Footstrike Coach to help you permanently and safely shift from one Footstrike pattern to another. Footstrike Coach allows you to create easy-to-follow workouts which will guide you to run with your preferred Footstrike and let you track your progress live in-run and post-run. By mastering workouts at multiple difficulty levels across gradually increasing distances, you can progress safely towards adopting your preferred Footstrike across all of your running.


If you decide to undertake a program to adopt a new footstrike then please access some exercise sessions to help condition your body to tolerate the new loading it will experience. You could incorporate some of the exercises into a warm-up prior to Footstrike Coach workouts:

You can also include some of the above exercises into post-run stretching and mobility exercise to try to reduce the effects of muscle soreness associated with new movement patterns, for example foot inversion / eversion exercises, calf and hamstring stretches, and foam rolling of the lower leg.

Below is a suggested 8-10 week Footstrike Retraining Guide, integrating NURVV Footstrike Coach workouts into your running schedule and using increasing distance and Workout levels to gradually progress your use of a new footstrike pattern: 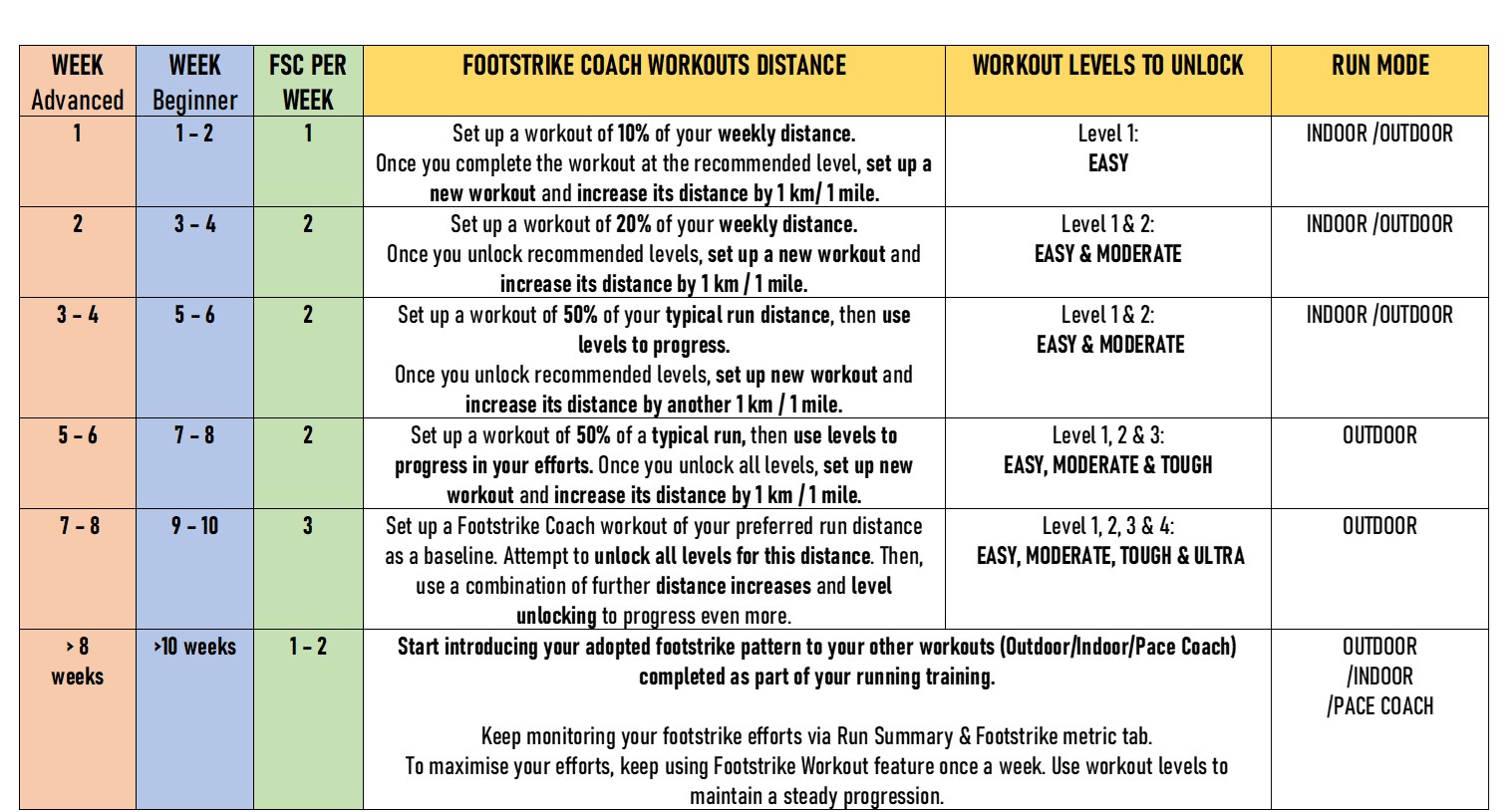 Tom has had time out from running due to an injury to the left knee joint. As part of a ‘return to sport’ program designed with his physio, Tom was aiming to transition from a consistent rearfoot strike towards a forefoot strike. The transition was suggested by a physio as a way of shifting the intensity of the load applied to the knee, increasing shock absorption capabilities of the lower leg, and finally to maximize the storage and utilization of energy into forward motion. 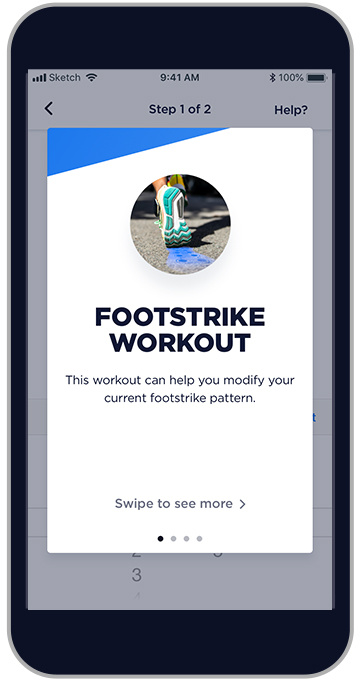 Tom's physio has encouraged a gradual Footstrike retraining to allow Tom’s body to develop the kinesthetic awareness of how the new Footstrike feels and to get used to altered loading patterns.
NURVV's Footstrike Coach was used to implement a program divided into two phases, Phase 1 (weeks 1-3) included one Footstrike Coach workout per week, rising to two workouts per week in Phase 2 (weeks 4-10). The entire program was expected to last 10-12 weeks, but the number of workouts per week, as well as the total program length was adjustable, depending on the level of soreness experienced and the change in running volume scheduled for a specific week. Key points for Tom across these phases were to avoid pushing himself too much and to ensure that his Achilles tendons and calf muscles adapted to the progressively increasing load.

After a discussion session with the physio, Tom decided to attempt a direct change from a Rearfoot to a Forefoot pattern across a 10-week period. It was suggested that during Phase 1 of his program he should complete his Footstrike Coach workouts on a treadmill to get used to how different Footstrike patterns feel and maximize his ability to adopt a new Footstrike pattern when running outside. 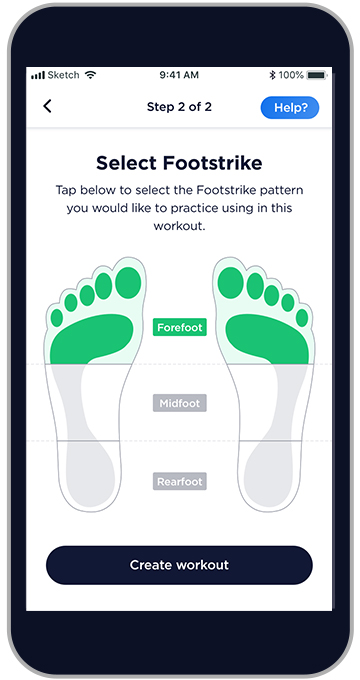 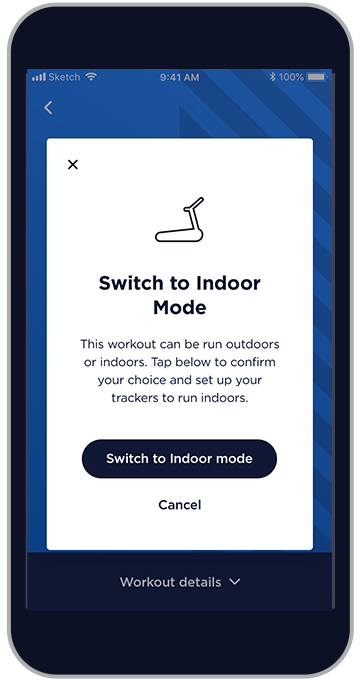 Footstrike Coach creates interval-based workouts to help runners change their Footstrike pattern, and this worked well for Tom. The concept of alternating between recovery and focus zones was familiar and simple to follow.

After a couple of Footstrike Coach workouts, Tom found that adopting a Forefoot pattern felt quite natural to him and he was very successful in reaching workout targets for both his left and right foot.
Due to his high success rate in adopting the new pattern, he was able to progress quickly, unlocking different workout levels and gradually increasing the total distance that he was running with his new Footstrike pattern, without risking an injury. He started with 2km workouts, moved to 5km workouts, and then to 7km workouts comfortably over the next few weeks. 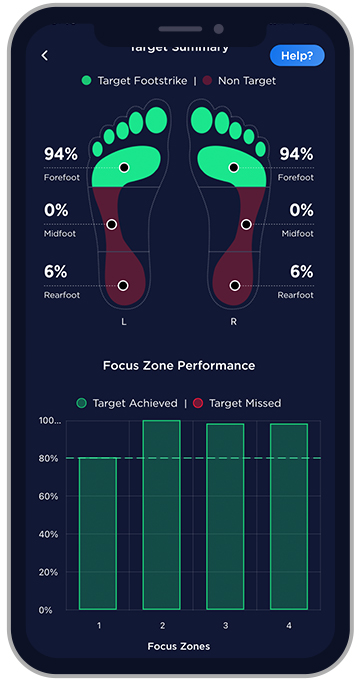 Below, is the Footstrike metric profile for one of Tom's workouts, where over 70% of his Footstrikes were made using his new Forefoot pattern. This includes time spent in recovery zones where the runner isn't focusing on using their new Footstrike pattern. By this point in the program, Tom had successfully shifted away from a Rearfoot-dominant pattern towards a mostly Forefoot pattern and was looking to boost the proportion of Forefoot striking to the highest possible level. 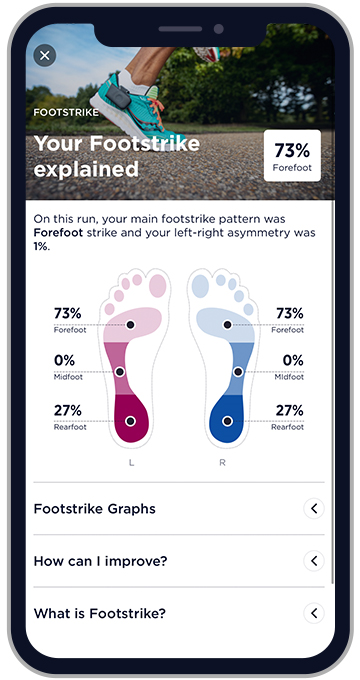 The Footstrike profile graphs are a useful tool that shows us Footstrike over the course of a workout. For this workout, we can see that Tom achieved a majority of his Footstike using his new Forefoot pattern and that he was particularly successful at this during the first 3 splits. It's also possible to use these graphs to identify areas for improvement - in Tom's case, the later stages of the run where an increasing percentage of Midfoot strikes occur, and a small proportion of Rearfoot strikes are seen right at the end of the run. 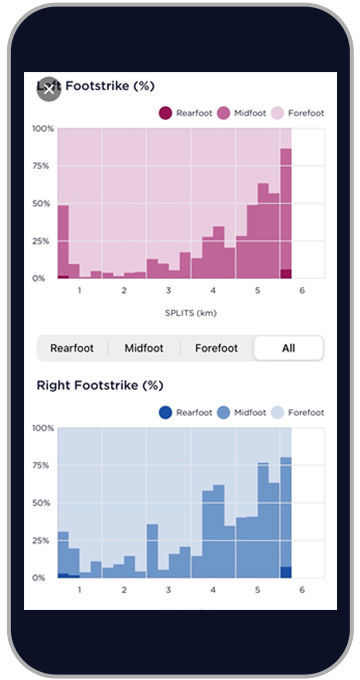 By following this program, Tom was able to meet his goal of successfully returning to sport without re-injuring his knee.
Footstrike Coach helped him to implement a key aspect of his rehab. work - re-training his Footstrike to shift away from his previous Rearfoot-dominant form and adopt a mostly-Forefoot striking pattern.