NURVV Run is compatible with the Apple Watch from Series 3 and Watch OS 5 onwards.

Configuring a Run with Apple Watch

To run with your Apple Watch, follow the steps below:

1) Switch the trackers on and connect to the iPhone as usual.
2) Navigate to the Run Hub and select a compatible run type. NURVV Run currently supports Outdoor runs and Pace Coach runs on the Apple Watch.
3) While the iPhone is configuring the trackers, open the NURVV Run app on the Apple Watch. Once the tracker configuration is complete, a watch icon will appear on the phone screen. Tap this icon to connect the watch to your trackers. 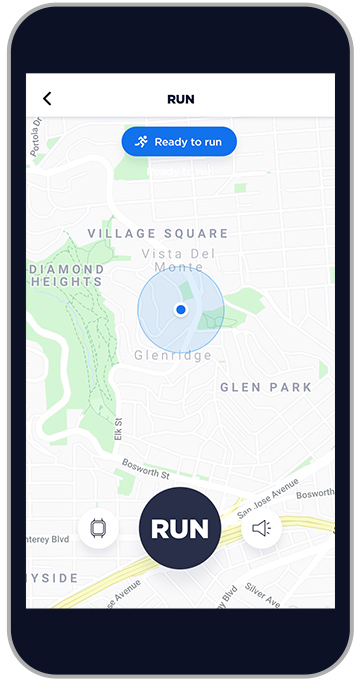 4) Your Watch will connect to the trackers and display the selected run. Once you see this, you can put your iPhone away or leave it behind and complete the run with your Watch.
5) Tap Confirm on the Watch to proceed with the selected run.
6) If you'd like to review/change the haptic and audio cues you'll receive during a run, swipe left and you can toggle these on or off. You can return to the Start Run screen by swiping right.
7) The RUN button on the Watch will turn white to indicate that the run can be started. Tap RUN to begin your run.

A variety of visual cues can be displayed during a run. To cycle through the available cues, swipe right.
To access session controls, including Pause/Resume and Stop, swipe left.

Once a run is finished, a summary will be shown on the Watch. To view the full Run Summary, open the NURVV Run app on your iPhone and connect your trackers.

Restarting the NURVV Run app on your Apple Watch